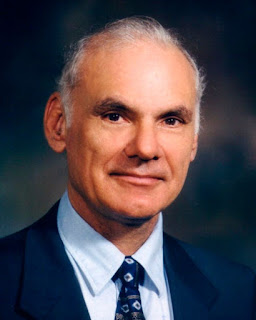 I learned yesterday that Dr Larry Roberts passed away on December 26th, at the relatively young age,  these days, of 81. I had the good fortune to work closely with Larry at his company Anagran, and since then also.

To me he was always just Larry, not Dr Roberts or Dr Larry. We were colleagues (though he was my boss) and we worked closely together. It was a privilege to know him this well. He was quite a humble man close up, though this wasn't at all the common perception of him. It fell to me to take his very visionary technical concepts, and turn them into something an engineer could go off and build. Let's just say there was sometimes quite a gulf between the two.

Larry created Anagran to pursue his conviction that flow-based routing was a superior technology, that could change the way the whole Internet worked. That was fitting, because if any one person could be said to have created the Internet, it was Larry. Other people make the claim, on the basis of having invented some core technology. But Larry was the person who convinced the US Government, which is to say the defense research agency (DARPA), to fund it. That made it accessible to every university and many private companies, long before most people had even heard of it - my then-employer was connected to the Arpanet, as it was called then, in the early 1980s.

A brief explanation of flow routing is as follows. Conventional (packet based) routers look at every data packet, at the addresses and other information in it, to decide how to treat it and where to send. It takes incredible ingenuity to do this fast enough to keep up with high-speed data transmission. Larry's idea was to do this only once for each network connection (e.g. each web page), thereby amortizing the work over, these days, hundreds of packets. It's not simple though, because for each packet you have to find the connection - the "flow" of flow routing - that it relates to. This too requires considerable ingenuity. By 2000 or so, the engineering tradeoffs were such that flow routing was demonstrably cheaper to build. However the established vendors, especially Cisco, had invested huge amounts and large teams in the technology of packet routers, and weren't about to make the switch.

In 1998 Larry created Caspian Networks to pursue this idea, attracting huge amounts of funding - over $400M during the life of the company. They did build a product, but the technology was barely ready for it. The result was large and expensive, and sold only to a handful of customers.

Larry realised this was the wrong approach. In 2004 he created Anagran, to apply the flow routing concept to a much smaller device. Thanks to a brilliant CTO from his past who he enticed to join him again, this was achieved. The Anagran FR-1000 was about a quarter the size, power consumption and cost of its traditional equivalent, the Cisco 7600. Technically, it was a huge success.

I left Cisco to join Anagran as the head of engineering in 2006. It took us another year to get to a shippable product, and then we learned the sad truth. Networks were so critical to companies' business that they weren't about to take the risk of switching to an unknown vendor just to save a relatively tiny amount in their overall IT budget.

Larry was not just a visionary. Part of his concept for Anagran was a truly innovative way to manage traffic, based on completely new mathematics and algorithms. He had implemented this himself, as a proof of concept, in what must surely be the biggest spreadsheet ever created. It used every single one of the 32768 rows supported by Excel. If a single cell was changed, it took about 10 minutes to recalculate the sheet. The concept, once you understood it, was simple enough, but turning it into something that would deal with a real world traffic mix and that could be implemented in our hardware, was a big job. It occupied most of my time for over a year, and even today we are constantly improving it. The result is described in US Patent 8509074. It was through working on this together that we really got to know each other.

This turned out to be key to the survival of Anagran. We repurposed the hardware we had built, to use this algorithm to control users' traffic in a service provider network, and successfully sold it as such. The company's eventual demise was a result of being a hardware company: hardware has to be "refreshed", which is to say reinvented from scratch, every few years. And our revenue was not enough to sustain that. Software, on the other hand, just carries on, constantly under change but never needing to be started over. Cisco IOS probably still has lines in it from when it was first coded in 1983.

Larry was a genius and a visionary, but nobody can be everything at once. Some people found him overwhelming, and he could be brutally abrupt with people who didn't know what they were talking about. He was also a huge optimist when it came to Anagran's business prospects, which led to strained relationships with the investors.

Anagran finally closed down in 2011. I'm very pleased to say that Larry's brilliant flow management invention survives, since the company's assets - especially the patents - were purchased by the company I founded in 2013, Saisei Networks, and his work is very much still in use. We continued to work with Larry in his post-Anagran ventures and I saw him often.

We'll miss you, Larry, even - maybe especially - the times when your ability to see ahead of everyone else, and incomprehension that they couldn't see it too, made life challenging.