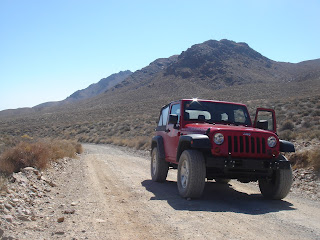 When we went to pick up the Jeep next morning, the guy in the office introduced himself as Richard Farabee. That was quite a surprise, and very good luck too. While planning the trip I'd found that many trails had been badly damaged in flash floods in July. Although there are several web forums dedicated to Death Valley and the surrounding area, there was surprisingly little information about the exact state of the roads I wanted to use. But Richard had driven all of them recently, and was an absolute mine of information. Thanks to him we were able to take routes that otherwise I would have hesitated about. One great thing about his Jeeps: they are really meant for off-road usage, with lifted suspension and over-size tyres. And he is happy for his customers to take them even to seriously challenging places - he had one out at Goler Wash, which was practically destroyed in the floods, and was waiting for the driver to report on it. This is most definitely not Hertz or Avis!

Our first day's itinerary was to drive up the main road to just short of Scotty's castle, which is already a 50 mile drive, then loop back past the Ubehebe Crater and down a parallel valley to the famous Racetrack. I'd previously wondered whether this would be possible with a normal car, since it doesn't involve any difficult hills or passes. Now I know: no. You probably could do it, but the risk of blowing a tire would be very high. It would definitely be a bad idea. In the Jeep it was easy, driving at a steady 25 mph or so, occasionally slowing down for a damaged area. 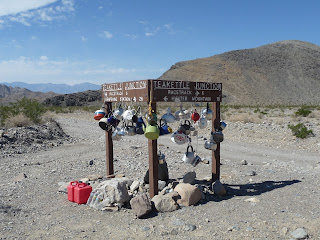 The first stop was at Teakettle Junction. It's just a junction between two gravel tracks in the middle of nowhere. Once upon a time someone marked it by putting a teakettle on a post there. That has led to a tradition of visitors adding their own signed teakettles. It's an amazing sight so far from any other sign of human life. 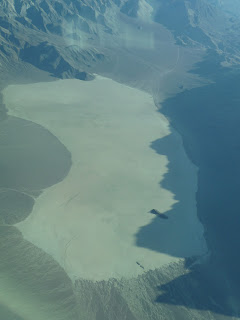 The Racetrack is a large playa, a dried-out lakebed filled with very fine mud. When dry - which means most of the time - it's hard enough that you can walk on it without leaving marks. In one corner, a handful of rocks have fallen onto the playa and then have travelled across it, leaving tracks in the mud. Nobody knows how this happens. The general idea seems to be that when it rains - not often, but very hard when it does - the mud becomes semi-liquid with very low friction. The area is also very windy, enough to blow the rocks along the slick mud, leaving a track which remains when the playa dries out again. Nobody has ever seen them move - not only would it require good luck to be there in the right conditions, but in the pouring rain, thick mud and 50+ mph winds, you wouldn't see anything anyway. Another plausible explanation involves sheets of ice. In the aerial picture, the moving rocks are at the top left (south-east) corner. 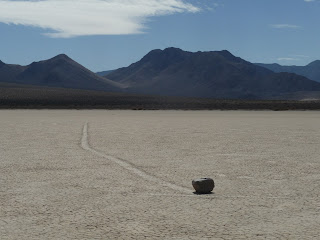 It's an extraordinary place. It would not be that hard to improve the road from Ubehebe for normal vehicles, so you have to assume that the Park Service wants to keep the access difficult and exclusive. Otherwise they'd have to build an electric fence round the playa to stop idiots from damaging it or stealing the rocks. As it is, there are tyre tracks on the playa - in the desert it can take decades for them to disappear.

From the Racetrack, the road continues down a notoriously difficult road, the Lippincott Grade, into the Saline Valley, famous for its clothing-optional hot springs. From there a loop is possible through the South Pass out of the valley and back onto the main road near Panamint Springs. The pass was so badly damaged during the floods that the Park's daily bulletin says it is closed. Richard said he'd driven it but it would be tough to climb out. And as it turned out, someone had managed to wreck their truck somewhere along the road that day, so it was blocked anyway. 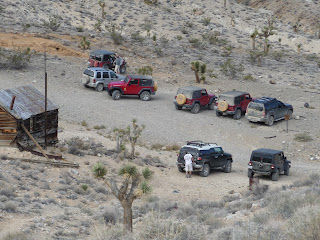 Luckily, there's an alternative. Turning left at Teakettle Junction leads to another complete loop back to the same place on route 190. This was our first taste of anything harder than a dirt road, climbing through the Lost Burro Gap, but the Jeep handled it with ease. Then, following Richard's suggestion, we turned right onto the track which climbs really up the side of the mountain to the Lost Burro Mine. That really is a Jeep track - narrow, steep, full of good-sized rocks, and washed out in places to less than the width of the Jeep so you have to place the wheels delicately into a gully a foot down towards the steep drop into the void. It requires a few moments of concentration and careful driving!

It's worth it, though, to see the mine. Today there's not much left, a hut which is still used by hikers, a few other wooden buildings, and the framework for some kind of mill. You have to stop and think that all of this, including the massive metal mill as well as the provisions for the 300 men who worked here at one time, had to come up that same track on the backs of mules, hauled from the railhead 50 miles away across the desert. It just seems impossible. Even now with modern trucks, not to mention helicopters, it would seem pretty difficult. 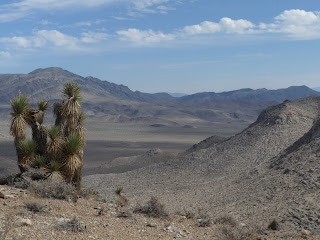 We looked around the mine then hiked a few hundred yards to the top of the ridge where there is a truly magnificent view down into the valley, and ate our lunch. Other people carry coolers, barbecues, tables and chairs. We were very happy with a box of crackers and a tub of cream cheese. In the half hour we were eating, a total of eight other vehicles showed up. This is pretty amazing, because during the rest of our drive we saw almost nobody. 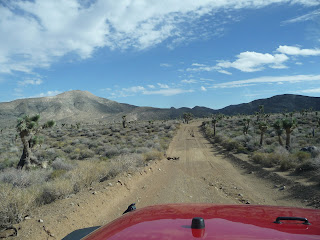 The road continues through Hidden Valley - aptly named since without a Jeep (or a plane) there's no way to even peek between the mountains and see that it's there. The road was mostly easy, though with deep sand in a few places which makes going in a straight line a bit harder. I think learning to fly a helicopter helps - as with the heli, you have to avoid over-controlling, taking the control input back out before you even feel it having any effect. There are Joshua trees everywhere, sometimes quite isolated, other times in vast forests extending for miles. Looking at Google Earth I couldn't find any watercourse out of the valley, so I guess the water just evaporates. That explains the sandy bit in the middle. 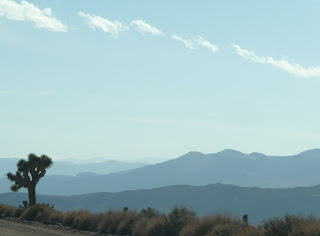 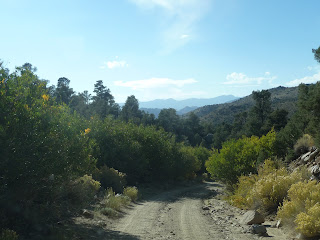 At the end of the valley, the road climbs Hunter Mountain. This part is spectacular and very enjoyable, with occasional glimpses into Death Valley to the east as it twists and turns, with many hairpins and sheer drops should you forget to pay attention. Then comes perhaps the amazing thing of all: a forest! Yes, right there in the Death Valley National Park, famous as the hottest, driest place in the country, there's a very green forest.

Soon afterwards we came to the junction with the Saline Valley road, where we met a couple of guys on motorbikes. These were the first vehicles we'd seen since leaving the mine - and they weren't planning to go on our route either. It's pretty sobering - if we'd broken down, there probably wouldn't have been another vehicle along the road that day. We might even have been the only vehicle on it the whole day. Fortunately, Farabee's Jeeps come with a "Spot" satellite/GPS gizmo, that lets you report your position and status (OK/help/HELP!) no matter where you are. So even if the worst happens, you're unlikely to suffer the horrible fate of the German tourists. (Briefly, in 1996 they got horribly lost driving a rental Plymouth Voyager in some very difficult trails, the car got stuck, and all four of them died of heat and dehydration in the June heat. Their car was found three months later, but the bodies weren't found until 2009, four miles from the car). 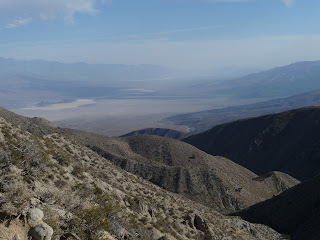 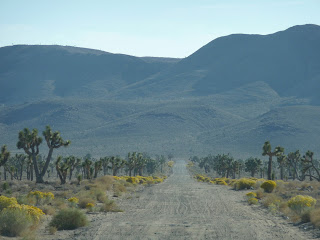 From here there is an amazing view down the Panamint Valley, Death Valley's western neighbour. After that it's a long but easy drive, though a horrible and uncomfortable road surface covered in small rocks, through an even denser forest of Joshua trees, until finally we reached route 190 and a very welcome stop at the Panamint Springs Resort. And from there, another 55 miles of spectacular desert driving back to Furnace Creek, arriving just in time for sunset. We'd driven about 180 miles during the day, nearly half on gravel or worse, and enjoyed every minute.