Life on the Ocean Wave - Riding the Hovercraft 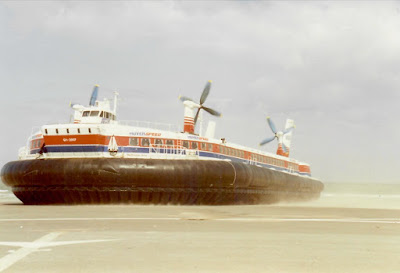 One day I will write a guidebook to nostalgia, called "101 Things You Can't Do Any More". In pride of place, along with crossing into East Berlin and flying on Concorde, will be the hovercraft journey across the English Channel (La Manche pour mes lecteurs français).

Since 1994 crossing the channel has been a dull business. You drive straight off the M20 from London into a vast car park, from which you are shepherded into a tunnel. You stop behind the car in front, like any other traffic jam, turn the engine off, and sit there for half an hour or so. You are vaguely aware of movement, but only just, as you listen to the car stereo or read a book. Then the car in front moves, you follow it, and you are on the A1 headed for Paris. It's efficient, relatively inexpensive, and of absolutely no interest at all.

The story behind this dull half hour is a fascinating one, of over a century of political and financial wrangling which led, finally, to the construction of the Channel Tunnel. While you are sitting there, bored, you are on a train travelling at 100 miles per hour through one of man's most extraordinary civil engineering achievements. But the whole point of it is that you don't need to be aware of any of this.

Until 1994, there was no way to travel with a car between England and France without being firmly aware of the 22 miles of open water that have protected England and Continental Europe from each other since 1066 AD. In Victorian times it was a serious adventure, tossed about on the waves in a sailing boat or later a steamship. Turner, the English artist, was inspired by it to produce some extraordinary paintings, even strapping himself to the mast of a channel boat during a violent storm for the experience.

It could be hazardous in many ways. It certainly was for Rudolf Diesel, inventor of the eponymous and omnipresent engine. After the German Navy had expressed no interest in his invention he took the steamer to Harwich to try and sell it to the British. One has to suppose that the Germans suddenly woke up to their mistake, because he disappeared en route, his body never to be found.

My own first Channel crossing by car was in about 1979. It was long and boring. The shortest crossing, the 22 miles between Dover and Calais, took a couple of hours, with another hour or so at each end of waiting, embarkation and disembarkation. The crossing itself was spent staring at the sea, resisting the limited attractions of the greasy fast food and fizzy beer available on board.

There were other, longer routes. For one summer holiday we took our car on the ferry between Southampton and Le Havre. That was an overnight trip, tucked up in a narrow berth in a tiny cabin. While waiting for the return ferry we got chatting to the driver of the car in front, who was struggling with a stuck-open window in his Lancia. He told us he was a fashion designer. A year later his name, David Emanuel, became famous as the creator of Princess Diana's wedding dress, but at the time he was just a thoroughly nice bloke.

From 1989, after I met Isabelle and started our long-distance relationship between England and France, I needed to cross back and forth more often. By then the hovercraft was an option. (You were wondering when I'd get to it, weren't you?) It offered a crossing in just 40 minutes and since it was smaller, a lot less time was spent messing about at either end. This more than made up for the extra cost.

My first trip was unforgettable. The sea was choppy, and with every wave we ploughed up high in the air then crashed down into the void between the peaks. Unlike the ferries you had to remain seated the whole time, in airliner-like seats stretched across the width of the cabin. I spent the whole journey staring fixedly but unfocussed at the horizon, trying to keep my breakfast inside me.

Afterwards I made a visit to the men's room. Next to me were two colleagues, one regaling the other with how much worse it could have been. "Remember that bit where it felt like we were just hanging in space?" His buddy groaned in response. "Well, last time, those were the good bits."

It was a fantastic way to travel though. You stood on the edge of the beach at Ramsgate or Calais watching the giant, roaring monster slither gently up the sand then sink gradually onto its giant rubber skirt as the engines stopped. Compared to a ferry it was tiny, with room for maybe 40 cars, all firmly tied down en route.

The hovercraft did not deal well with rough seas. At least, I think the machine itself did, but there was a limit to what you could ask passengers to put up with. This was brought home to me on my most memorable trip, in April 1990, taking my children on a spring break to Paris, Toulouse and Hossegor.

It was memorable for many reasons. My car's wheels had been stolen a couple of weeks earlier, and the replacements were on long back-order. In place of my beloved Golf GTi, the insurance was paying for that pinnacle of British luxury motoring, the Rover 827. The adventure started long before we got near water. We had stopped off for tea at my parents' house in Romford, more or less on the way to Ramsgate. When it was time to leave, somebody - we will be discreet here - revealed that they had locked the car keys in the trunk. It has been a source of family amusement ever since, but at the time it was not funny at all. Eventually the RAC showed up.

"Have it open in no time, guv. What car is it?" said the smiling mechanic.

His faced dropped. "Blimey, they're nearly impossible. I'll 'ave a go anyway." That was just the kind of reassurance I was looking for. After half an hour of fiddling about with long thin bits of metal, he finally got the door open, and we set off for Ramsgate.

As it turned out, none of this mattered. We arrived to see a big handwritten sign, "Hovercraft cancelled due to bad weather, please go to ferry terminal at Folkestone". We drove the 20 miles or so down the coast in what was indeed terrible weather, the gale-swept rain swirling around the car. Upon arrival we learned that the ferry too was running hours late. We filled in the time with a visit to McDonalds, and finally boarded the ferry around 10pm - when we should already have been well on our way down the A1 to Paris. We climbed up from the car deck, and waited to set sail. And waited, and waited, and waited.

Finally I went back to the car deck, and found a loader who explained the delay to me. The waves were huge even inside the harbour, and the ferry had sunk into the trough of one just as a bus was crossing onto the ramp. The ramp crashed into the bottom of the bus, severing the brake lines and locking the brakes firmly on.

"Normally if that happens someone crawls underneath and releases them by hand. But not tonight," said my interlocutor, gesturing at the bus which was tossing around crazily as the boat did the same. Instead they had to tow it off, wheels locked, with the giant tractors used for container trucks. The first effort snapped a rope the size of a man's arm. Eventually they got it off with an even thicker one.

I whiled away the time by wandering around the open deck in the gale and blowing rain. I read the notice explaining how to launch a lifeboat. I have to suppose that the sailors were trained and knew the procedure, so this was just in case the passengers had to do it themselves. It made the instructions for Chinese consumer electronics look positively lucid. I didn't understand a single substantive word. It read something like the following.

And so on and so on. Eventually we set sail, and after a rough crossing during which we all slept soundly and several hours driving, we arrived in Paris at about 5am.

Our trip was wonderful. We explored Paris together, had an Easter Egg hunt at Isabelle's mother's house outside Toulouse, and paid the first of many, many visits to Hossegor on France's Atlantic coast. On the way back we spent another night in Paris, creating another family memory. We had to be up very early for the return trip to Calais. I went out to buy croissants. My daughter, about 7 at the time and very grumpy at her early awakening, simply stared at hers.

"My croissant is too bumpy!" she complained.

Despite bumpy croissants, we made it uneventfully to Calais and could watch the monster machine arrive on the beach, where the photo at the top was taken. The sea was perfectly calm, one of the best hovercraft trips I ever did.

I missed them when the tunnel opened, a few years later. The hovercraft is a brilliant invention, even without its famous contribution to the Hungarian-English phrasebook ("My hovercraft is full of eels"). But somehow it is never quite the right tool for the job, and there is hardly anywhere in the world where you can still ride them. Still, it was fun while it lasted.
Posted by n5296s at 16:01