Lighting up Shiny, the Wismar Railbus 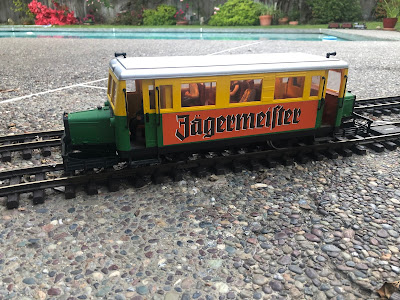 In the 1920s, road competition was really beginning to hurt rural railways everywhere in the world. The economics of running a steam engine, trailing a handful of elderly carriages behind it for three or four journeys per day, had never been good. Now they were terrible. The railway companies looked to modern technology for a solution. A diesel powered railbus could be operated by one man, requiring almost no routine maintenance - unlike a steam locomotive which took several hours of preparation every day. And as a bonus, it offered the same level of comfort as the road competition, rather than the hard seats and general decay of carriages that were often 50 years old. More frequent (well, less infrequent) services could be run, as well.

All over the world various different railbus designs appeared. Another of their advantages was that they run readily in either direction. Nowadays, we take it for granted that there will be a driving cab at either end. But that wasn't obvious in the beginning. For one thing it takes up space that could otherwise be used for passengers or freight. For another, operating the engine and transmission from a distance requires some kind of linkage. An electric or pneumatic system sounds ideal, but it had to be maintained in the field by steam locomotive engineers whose most subtle tool was a coal hammer. And mechanical linkages were hard to keep working. (When I was a teenager, I travelled all across France on a bus with a rear-engine, unknown in England at that time. Every gearchange was an adventure, as the driver struggled with the worn-out mechanical linkage to try and persuade the gearbox, 12 metres away at the back of the bus, to engage the right gear, or at least some gear).

So other solutions to the problem were developed. The French were especially creative. Some early railcars had a cab at one end only, next to the engine, and a kind of mini-turntable under the bus. At the terminus the crew would crank a handle until the bus was resting on the turntable, push the bus around 180 degrees, then retract the turntable. A much more widely-used idea was to put the driver in a turret on the roof. He sat sideways with the controls in front of him. The most common railbuses in the 1950s had the turret in the middle and offset to the side. They were called Picassos, after the painting with the girl's nose to one side of her face. The poor drivers must have suffered terribly from stiff necks, having to look sideways the whole time.

In Germany another ingenious, if improbable, solution emerged. In 1932 the Wismar company produced a railbus which had a completely independent engine and gearbox at each end. Whichever end the driver was sitting, he simply started the corresponding engine and drove from there. At the terminus he stopped that engine and put the gearbox in neutral, walked to the other end, and used the opposite engine. This made it possible to use readily-available Ford engines and transmissions, rather than developing something specific for railway use - making their product a lot cheaper. The resulting vehicle looked very odd, like a pig with a snout at each end. For all that, they were the salvation of many little rural lines. There are several still running today on preserved railways in Germany.

LGB made a model of this odd vehicle, and when I built the garden railway I really had to have one. We called him "Shiny", from the German name "schienenbus" (meaning railbus). At the time I added a DCC decoder in the simplest way possible. And Shiny trundled reliably around the railway, just as happy in either direction just like its prototype.

There are two ways to go about installing a DCC decoder. The simplest is just to put it as a "bump in the wire" between the track power and the motor. Sometimes with older locos, this means separating the track power from the motor, but otherwise it's easy. The disadvantage, though, is that nothing works if the train isn't moving - in particular, the lights. That's what I did for Shiny.

The more complicated alternative is to wire the lights, and any other accessories, to the corresponding outputs of the decoder. This works perfectly, but it's complicated. All LGB locos have a fairly elaborate circuit board to operate lights and the rest from the track power, using strange proprietary connectors. I have replaced them in some engines, but it's a lot of work. The little railbus would be especially difficult, because of its headlights and taillights that change according to the direction of travel.

But I really did want the lights to work when the train is stationary. It just looks so much better at night or in the twilight. And I really wasn't ready to build a replacement for the internal wiring. So I thought of a third approach.

Using a relay makes this very easy. It could be done using an H-bridge chip, but that would also require some electronics to remember the last setting - much harder than just soldering a relay onto the board.

I chose to feed the fake power from the always-on auxiliary supply on the decoder, rather than from the lighting output. This means the lights cannot be switched off. I prefer this - in daylight they are invisible anyway, and at night I always want them on.

While I was buying the parts for this, I also noticed on eBay some seated LGB figures, some of whom are now installed in Shiny. I'm sure they're much happier now they can read while the train is stopped at a station or in the sidings.
Posted by n5296s at 21:00