Flying under the Golden Gate Bridge

I did it! On Sunday we flew the helicopter under the Golden Gate Bridge. It was pretty exciting. The picture shows us just approaching the bridge from the east. We're at 100 feet, about half the height of the deck.

The sight-seeing operators do this all the time. I was astounded when I first saw the red Jetranger that does these flights around the city zoom under the bridge. It's quite legal. There's a special exemption to the regulations that allows helicopters to fly pretty much anywhere without the distance requirements that apply to airplanes. (Take a look at FAR 91.119 if you're interested).

I'd discussed it with my instructor a few months ago. The plan was to fly through the SFO Class B airspace up to the city, under the bridge, then back again by the same route. Unfortunately though, since the incident earlier this year, SFO Tower is being much more cautious about Class B transitions. During the busy part of the day, they are generally not available. And indeed that's what San Carlos tower told us . Our second plan was to cross the hills at route 92 over to the coast, and go round the Class B. Although it was cloudy, there was plenty of room under the clouds to do this.

But then San Carlos handed us off to Norcal Approach, who cleared us through the Class B at 3500 feet. I've been given this transition before and it works well. Sometimes you have to ask for it, a bit like Special VFR. So we climbed before we got to the clouds, flying over the undercast and also the SFO departure corridor. It was very pretty, the airport and the city were both visible through gaps in the clouds, although I didn't manage to get a decent picture.

Then a very rapid decent once we were past the Class B surface zone, down to 700 feet and ready for the big adventure. We went over the south end of the bridge, slowed right down in a left descending turn, and at a stately 40 knots or so passed under the bridge at 100 feet. It was over all too quickly.

Although it's perfectly legal, we were both a bit nervous that people might react badly, so we climbed well away from the bridge, back over the south end, and then across the Bay to Oakland for the transition back south. 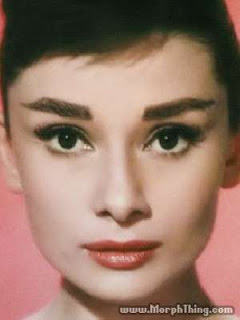 There are two movies that feature both Audrey Hepburn and the Eiffel Tower (well, I suppose there could be more). One is well known and you will find it by googling those two subjects - Funny Face, one of her hallmark movies. It's a great movie, which we saw at the Stanford Theater last night. (One of the really nice things about living near Palo Alto is this movie theater, lovingly and expensively restored and specializing in classic movies, mostly pre-1960).

By coincidence, we had watched the other one the previous night at home. Any guesses? It's the Lavender Hill Mob, one of the greatest of the British Ealing comedies, from 1951. The main characters are Alec Guiness and Stanley Holloway, with other classic stars from the time like Sid James and Sidney Tafler. The Eiffel Tower has a central role in the plot, including a fantastic scene where the two heroes run down the emergency staircase. And Audrey Hepburn? In 1951 she was still an unknown. She has a tiny walk-on part at the beginning. You wouldn't recognize her unless you were looking. It was only when the closing credits rolled by that I saw her name.

Going back to Funny Face, there are some wonderful period-piece scenes. For avaiation fans, the scene of the TWA Constellation taking off is enough to make the whole film worthwhile. Then they land at Orly, where on short final they fly over Notre Dame and the Champs Elysees. Funny, this never happens when I go to Orly. 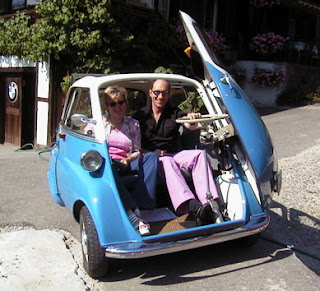 Another great detail is the Isetta, a 1950s "bubble car". It's a weird little thing, with a single door which is also the front of the car. For the movie they gave it a funny pweep-pweep horn, which the real thing didn't have.
Posted by n5296s at 12:02 No comments: