In Britain you pay about $20/month to receive several channels of world-class television programming, with no advertising at all. In France, you pay nothing at all, and get advertising only between programs. Here in the US, we pay Comcast well over $100/month, for way too many indistinguishably mediocre channels, all carrying 30% advertising so you can't really watch anything anyway.

This has irritated me for a long time, especially considering how little television we actually watch. Now if we could watch the BBC or native French television, that would be a different story. (BBC America is not the BBC, just a kind of franchise which seems just to show the same three programs over and over again, in the rare gaps between adverts).

A few months ago I went to a friend's house and he showed me how he had "cut the cable" and was watching French TV. The BBC has had video-on-demand ("iPlayer") for quite a while now, though it's only meant to be available in Britain. This was an inspiration.

Finally I decided to replace our old TV, which pushed me over the edge to do something about my dislike for Comcast. The old TV was one of the very first LCD models, it cost a fortune back in 2002 and the thought of all that sunk investment has been putting me off an overdue replacement for a long time. But in addition to seeming awfully small now (28"), it had also started to make an annoying hum. Plus it had very limited inputs for modern stuff, like no HDMI.

I chose a 47" LG television as the center of things. It had great reviews and does everything I need. It even has 3D, for which it comes with special magic glasses, though I haven't tried that yet. It's obviously popular, because my first order still hadn't shipped after a week. I finally bought it from Amazon, though even then I had to wait several days for it to ship.

The real center of the installation, though, is a computer. You need a web browser to get the BBC and French TV, and VPN as well. I wanted something compact and, most important, fanless. Modest fan noise is OK in an office but not when watching a movie or listening to music. It turns out that the choice of fanless PCs is very limited They're mostly pretty expensive and made for industrial applications where the problem is dust rather than noise. I found this Habey BIS-6761 at Newegg, which fits the bill completely - in particular, it has HDMI output. One nit is that it doesn't have built-in WiFi. I bought a USB dongle for that, but it turned out that the wireless thruput in my house wasn't good enough for HDTV anyway.

It took me a while to set up Ubuntu 12.04 the way I wanted it. I tried loading MythTV, which is supposed to be the Linux HTPC app, but I was pretty underwhelmed by it. The standard installation has no mouse support - you have to navigate with the arrow keys! If you want an authentic 1980s computer experience it's a perfect app, all you need is an 8-track player and a DeLorean parked in the driveway to complete the experience. There is a way to enable the mouse, but by the time I found it I didn't really see any benefit from MythTV anyway.

I liked the idea of using an "air mouse" (one that works by moving it in the air rather than using a mat) as a remote control. That wasn't a success. All the available products have very mixed reviews. I finally settled on an "Air Mouse Go Plus", but when I tried it I found it doesn't work with Linux. This strikes me as shabby engineering - there's no reason it should need any kind of host support to just emulate a mouse. So that has gone back for a refund. Instead I have a Logitech K400 cordless keyboard/trackpad. It also had mixed reviews but it works well and does the job. The only problem is that it just plain doesn't work if you rest it on your knees, which is a natural thing to do. This seems like poor design and I would like one that worked better, but it's a problem I can live with.

The final piece is the VPN connection which allows me to watch UK and French content. These all have a requirement for you to be in the respective country. I'd already subscribed to a service called VPNUK when I first started thinking about the idea. For about $12/month this gives me a VPN which I can terminate either in England or France. Now, I can watch the BBC, ITV and all the French channels. My first test was to watch a recent Dr Who episode, and it worked perfectly. One oddity though - the French program "Thalassa" only seems to work without the VPN connection.

I also have a Roku box, but this has been a disappointment. The advertising led me to think I'd get a good selection of foreign TV, as well as various other free things. Well, it does - as long as you like Albanian or Kazakh television. Anything a bit more mainstream - like Britain or France - is missing. I did watch one hilariously bad free movie, from 1946 - set mainly at the Furnace Creek Inn but even the Death Valley National Park is so ashamed of it that they don't include it in their list of movies shot on location there. I guess it'll be useful when we get the Netflix subscription.

The picture shows the complete setup, with the Roku peeking out below the TV, and the silent computer on the shelf below. There's also a stand-alone multi-region DVD player, which I kept for simplicity, a Wii, and a CD drive for the computer. The Comcast decoder box has been banished, although for now we're still getting the basic channels directly through the TV, until we complete the cable cutting by cancelling the Comcast subscription. There are still a couple of free inputs to the TV if we think of anything else. 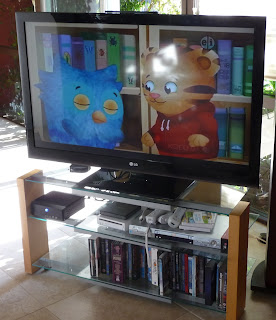