I was just 4 when my mother's father died, and about 12 when her mother followed. My memories of them are strictly of the childhood kind, odd snippets, out of context.

They did not have a happy or fortunate life. Before the War, they lived in a series of tenements in south London. My mother remembers one of them that was next to a tripe yard, where lorries piled up high with raw tripe would arrive from the slaughterhouse to be distributed to the nearby butchers. Even a small piece of the stuff stinks, the stench from truckloads of it must be beyond imagination. We ate all kinds of offal when I was small - liver, kidneys, heart - but my mother could never bear tripe and we never ate it. Earlier they lived for a long while in the Borough, just south of the Thames. That was where my mother spent her infancy. It was not a nice place in those days.

My grandfather was universally known as Pop. He grew up in a small village in the depths of the Suffolk countryside - Glemsford, of which more later. Like so many of his generation, he fought in the trenches in WWI, and he survived it. What made him come to London in search of fortune, I'll never know. I remember one photo of him, a tiny contact print. He had a moustache - even though I was only 4, I can remember him tickling me with it. He worked in a bakery as a general labourer. One of his jobs was cleaning the huge ovens - this was done as soon and as quickly as possible, meaning he had to climb inside them when they were still hot enough to cook you if you lingered.

My grandmother was not - to be very kind - the easiest person to get along with. Her life wasn't easy, either. She had a deformity that made one of her legs several inches shorter than the other, and wore surgical boots all her life which must have been a miserable experience. In those days people like her weren't physically handicapped, or disadvantaged, or differently abled - they were cripples, with all the contempt and disdain that one short word onomatopeically captures. I know that she was born in Gravesend, Kent, but I have no idea how she ended up in London. In those days working-class women didn't have jobs, but that doesn't mean they didn't work. In addition to raising three children and keeping house before there were any machines to help, she took in washing, cleaned offices, and all the other miserably paid menial jobs that were open to her kind. I'm sorry to say that the daily unhappiness of her life reflected in her personality. She was never happy with anything and could always find a reason to complain, in complete contrast to Pop who - by all accounts - could always see the cheerful side of anything.

Pop had been admitted to hospital for something, not serious. At visiting time, a nurse came by and he asked for a cup of tea. She turned her back to pour it, and when she turned back he was dead. Nobody could wish for a simpler, easier way to go. He was around 70, I'm not sure anyone knew his exact age.

My grandmother wasn't alone after his death. She shared a large house in Brixton, south London with her other daughter - my aunt - and her husband and two children, my cousins. There were four large rooms upstairs and four downstairs, where my grandmother lived. There was no bathroom, and no inside toilet - though at least the toilet was only just outside the back door, unlike my other grandmother's house in Dovercourt where it was at the bottom of the garden. After Pop's death, they converted one of the downstairs rooms into a bathroom. Until then, weekly ablutions were in a tin bath, filled from the kettle. Yes, really.

The house became briefly famous several years after her death, when my aunt's family had moved on. 22 Normandy Road was the epicentre of a riot in Brixton when police shot an innocent woman, whose home it had become by then. 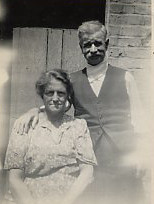 After Pop's death she would go on holiday every summer, in Southend. It's a short train ride from London, a classic English seaside town. Its main claim to fame is the longest pier in Britain, at 1¼ miles - it even has its own train. I went there often as a child, though never for more than a single day. My grandmother went for a week, no doubt a memory of one-day "holidays" there before the War. She always stayed in the same bed-and-breakfast, a brisk walk back from the seafront. During the day she would sit in a promenade shelter along with the other old folk, watching the grey Thames estuary. Lunch was always at the Black Cat Café. I've never been there, but it's easy to imagine the greasy sausages served with hot, sweet, milky tea.

One thing she did enjoy was a game of cards - not that it stopped her complaining that the pack wasn't fair, that she was on a losing streak, and everything else you can imagine. From an early age I was introduced to the game of seven-card brag. Unlike the three-card variant, this isn't a gamblers' game, more something for a family evening round the fire. Pop had a fantastic memory for cards. He could remember every card that been played, and who played them when. In brag the cards aren't shuffled between games, so remembering the cards is a huge advantage.

My last memories of her are of visiting her in the Camberwell hospital where she died. Hospitals are never happy places, and Victorian hospitals in the 1960s were miserable even by those standards. I remember hanging around by her bedside while the adults tried to think of something to talk about.

During the War there was a major effort to move children out of London and into the countryside, where there was less risk of being bombed. Of the risks of abuse of all kinds, we won't speak. Mostly children were sent on their own, their parents staying in London to work. It must have been traumatic and awful, for most of them anyway. My grandmother chose to go there herself, taking my mother and her sister to Pop's family in Glemsford. She hated it there. The contrast between the primitive bucolic quiet and the bustle and filth of London is hard to imagine nowadays. They stayed for just two weeks before scurrying back to The Smoke.

But several years after her death, when I was a teenager, we drove one Sunday to Glemsford, our family piled into the load space of my Dad's delivery van. My mother remembered the house, and as we stood outside looking at it, a kindly lady came out and invited us in for tea - a last link with my barely remembered grandfather.
Posted by n5296s at 19:27 No comments: