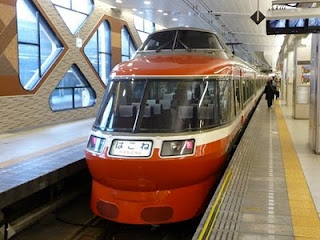 Ever since the very first time I visited Japan, nearly three decades ago, I've wanted to travel on the Odakyu Line's Romance Car Express. They have these really cool trains with the driver's cab 747-like on the roof, so passengers in the first car have a panoramic view of the track ahead. And how could you resist the name? I've even contemplated travelling the length of the line just for the sake of it. On a recent trip I finally had a reason. We were travelling to Hakone, for a stay at a traditional Japanese inn (ryokan) and to do some autumn leaf spotting, and the Romance Car is the ideal way to get there, in fact the only direct service from Tokyo.

So we went out to Shinjuku station, supposedly the biggest station in the world if Tokyo hasn't overtaken it by now. Tickets are only available from machines, and while I suppose I could have figured it out in the end, I was very relieved when a helpful member of staff showed up and guided me through the whole thing, including buying the special all-inclusive Hakone Tour ticket. This kind of extraordinary personal service only happens in Japan. I chose our seats in the very end part of the Romance Car, and off we went to catch our train.

All passenger trains in Japan have the locomotive built in, from the Shinkansen down to the humblest one-car rural train. That means they're symmetrical - the front is the same as the back. And in the case of the Romance Car, that means there is an observation car at the back as well as at the front. And guess where our seats were... the booking system doesn't warn you that your view will be of the track receding behind you.

The view of course is exactly the same. But - which I hadn't expected - there's something very surreal about seeing the world zooming away backwards behind you. After a while it begins to feel like your whole life is running backwards. The journey only lasts about 90 minutes. If it lasted for several hours, I'm sure you'd start to get younger, eventually becoming the little boy in short trousers whose Dad used to hold him on the bridge parapet to watch the trains go by. 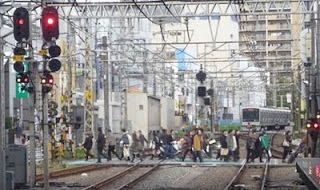 The most surprising thing is the level (grade) crossings, of which there are a great many. They open within seconds of the train passing - whereas they close much earlier, for safety. So as soon as you pass, the barriers open and - Japan being a crowded place - cars, bicycles and people flood across the road.

On the way back we bought regular tickets for a car in the middle of the train. We weren't sure we could take the Living Life Backwards experience again.
Posted by n5296s at 01:01 No comments:

If you're used to doing business in the US, business meetings between Japanese companies seem very strange at first. In the US, a meeting generally lasts several hours and is planned well in advance. The discussion is focussed, with an agenda and a deliberate progression towards a conclusion. At the end, though there are generally no formal minutes, there are action items and agreements. You know what you've achieved, whether it was a lot or a little.

When I first started working closely with my Japanese colleagues, I just couldn't understand what was happening. Meetings, even at a high level, can happen at short notice. They're rarely longer than an hour. And at the end, as a Westerner you have little idea what has been discussed, and no idea at all what has been concluded. It's just like a cosy chat amongst old friends. Very often, it's not at a formal conference table, but sitting in armchairs around a low table. For this reason I call this meeting style the "Fireside Chat".

An OL ("office lady", a kind of general administrative assistant, invariably female and fairly young) brings in drinks - hot tea in winter, cold barley tea in summer. The head people from the respective teams start a conversation, others join in occasionally, showing due respect. At the end one of them looks at their watch and says, "ah, I think it's time to finish" (actually what they say is a lot less explicit than that). Everyone stands up and files out to the elevator, performs the ritual elevator bow, and the visitors depart. "What was that all about?" you're left thinking to yourself.

Since business does get done in Japan, just as effectively as anywhere else, you can't help wondering how this works. Of course the well-known Japanese dislike of conflict plays a part. But there are as many reasons for business partners to disagree in Japan as there are anywhere else - price, specification, availability, all that stuff - yet they evidently do get resolved somehow.

In the end I realised that geography has a lot to do with it. In the US, such meetings typically involve a plane journey, often an overnight stay. They're expensive and it's important to get the most out of them. In Japan, most large companies have their offices in Tokyo. It's rare that it takes more than a half-hour taxi or subway ride to get there. So meetings are cheap, and you can afford to do them quite often. They don't need to be so focussed, it's OK to let things kind of evolve naturally over several of these apparently rather loose discussions. That coupled with the natural Japanese way of doing things just leads to this completely different style.

Of course, as with everything in Japan, it may be that I've missed the point completely.
Posted by n5296s at 21:51 No comments:

boost serialize - not such a good idea!

I'm a big fan of the boost libraries for C++. Mostly, they are a huge productivity gain - things like regex, function and bind can reduce the work involved in a complex program by half or more. So when I needed to pickle a very large (gigabytes) and complex data structure between restarts, boost was the obvious place to look.

Boost serialize certainly looked like the answer. Just add a few lines to each class saying what you what to save and restore, then with a single function call, you can pickle the whole structure and later reload it. It takes care of loops, diamonds and all the other things that happen in real-life data structures. And if you don't like the default way of saving something, it's easy to write your own. How good can it get!?

Well, that's the theory, and it could have been the practice too. But it isn't. For some reason known only to themselves, serialize's authors decided that the C++ inheritance mechanism wasn't for them. They invented their own completely parallel mechanism for dealing with polymorphism and subclasses. The effect is that trying to save my structure results in an exception thrown from somewhere in an enormous depth of function calls. I persevered, and tracked down what was happening. For some reason - and it's just impossible to plough through all the code and figure out the details - it silently ignores some of the calls to the subclass registration process. After several days of trying to figure out the details - on a live application because that's the only place the data can be collected - I have finally given up. I'll live without this capability in my program.

Unfortunately this is a common problem with boost. It seems to be de rigeur to invent new ways of doing things even though they are more complex and don't work especially well. The build system is another case in point - instead of using make, known and hated by generations of programmers, they invented their own, bjam, which is unknown and incomprehensible. If it works for you, great. If not, forget it.

I'll carry on using boost, but you do have to be selective. Unfortunately.