Flying the iPad - happiness at last

A couple of months ago I did a routine instrument curency flight. I was complaining to my instructor that Jeppesen, in their continuing move towards being a zero-customer-servce company, had dropped their "Express" approach chart service, where they sent you a new complete set of charts every two months.

"What's wrong with you?" he said, "Why aren't you using an iPad like everyone else?"

So, I asked around a bit, and decided to take the plunge into the 21st century and get one. The first question is, which kind? You can get them with varying amounts of memory, important if you're going to load them up with movies. Charts take quite a bit too. And you can get with or without mobile data. Without mobile data also means without built-in GPS, which would condemn you to using an external GPS with the attendant cables and clutter. So I went for 32 GBytes of memory - enough for aviation charts for the whole country, plus plenty of room for other stuff - and the 3G/GPS.

The universal consensus for the software to run was ForeFlight. I chose the more expensive option that shows you where you are on the plate as you fly an approach. Situational awareness is a good thing.

You have to hold the iPad somehow in the plane. Following recommendations, I bought a fold-out kneeboard from MyGoFlight. It seems sensible, the iPad goes on one side, displaying whatever chart you need, and a normal clipboard goes on the other side, for notes and whatever paper stuff you need.

I never really got it to work though. Unlike my regular kneeboard, which stays open, this one keeps trying to fold itself up during the flight. The worst was during landing, when it slithered down to my knees folded into a V-shape. I thought about improvising ways to hold it open, but it seemed complicated. I tried squishing the hinges with pliers, to tighten them up. This worked a little but it still wanted to fold up and slide down my leg in flight.

It seemed a good idea to protect the screen and reduce reflections and glare, so I also bought a pack of two fancy screen protectors. These were a dead loss - well, the first one was. I've never dared try the second. For a surface of this size, it's impossible to avoid trapping at least one dust particle unless you happen to have access to a clean room. Once that happens - which it will - any attempts to improve things just go rapidly downhill. The protector was in the garbage ten minutes after starting.

I needed a way to use the iPad in the helicopter - where the cyclic makes a big kneeboard impossible. So I also bought the simple knee board from MyGoFlight, and also a yoke mount. The yoke mount consists of a clamp, a spigot that clips into the back of the plastic iPad case, and a double-ended clamp that joins these two together. In my plane (Cessna 182), it didn't work out. It held the iPad so high that it obstructed most of the instruments - it would be totally unusable for IFR flight, and awkward even for VFR. I tried mounting the clamp sideways, with the clamp sticking out between the center and one arm of the yoke. That sort-of worked, but wasn't really ready for prime time. For one thing it unbalanced the yoke, so holding it straight for level flight required constant pressure. For another, the screen was vertical so it was hard to read from a normal flying position.

The built-in GPS works fine in my high-wing plane, and in the helicopter too. I found no need for an external GPS, unless you want to pay serious money for the Stratus and get in-flight weather as well. One surprising omission from ForeFlight is any kind of flight tracking. Luckily there is another app which does a wonderful job of this, called CloudAhoy. You start it at the beginning of a flight, and stop it at the end. Afterwards, when it can, it uploads all the flight data. Now you can go to www.cloudahoy.com and view your flight track, superimposed on Google Earth or a sectional, with complete data on altitude, speed and track. You can even relive the flight on Google Earth. The accuracy is astounding, even when you're taxiing. This is really a great app.

I flew a cross-country in the helicopter with the simple holder. I had the iPad on my left leg and my usual small clipboard on the right. Nothing got in the way of any of the controls. CloudAhoy worked perfectly, showing me afterwards the exact location of the private back-country airstrip I'd spotted. But climbing out on the second leg, I noticed the screen was blank. Pressing the button got me a message saying "I'm too hot, I've shut down". And indeed in the 34 degree (C) ambient heat in the Central Valley, with the sun blazing down through the canopy, it was too hot to touch. I'm very glad I wasn't relying on it to show me the details of an approach to minimums! It came back to life later but it's certainly a concern for relying on it as the only source of charts. I found afterwards that this is a common problem when flying with the iPad. 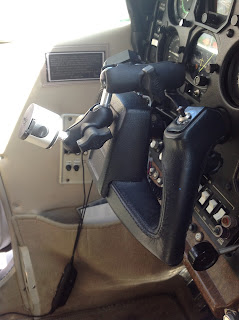 I could also use this setup in the plane, but I wanted to try one last thing. From Sporty's I bought some RAM mount spare parts, a "double ball adapter" and a "small double arm". My idea was to hold the iPad lower down and also to allow it to be angled a bit. This worked very nicely. The picture shows how it works. The thing that looks like a piston clips into the back of the iPad holder, allowing it to rotate and holding it at both right height and at a good angle for easy reading. There is just enough clearance to pull the yoke fully back.

I have one experiment left: from Sporty's I bought a screen protector called iVisor which claims to be reusable and hence be a solution to the dust problem. We'll see.

So, to summarize, what I have found works is:
I can't recommend the double kneeboard from MyGoFlight - I never got it to work and having attacked it with pliers and chipped the paint, I can't even sell it.