The short but happy (and rapid) life of Hercule "Purr-o-matic" Poirot, RIP 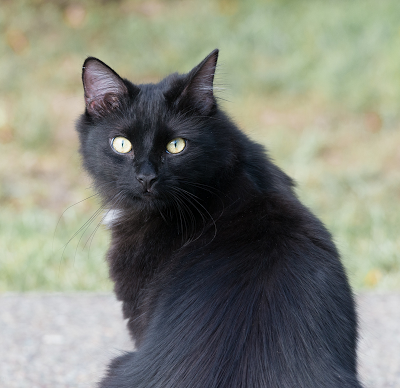 When our first cat, Lewis, died in February 2012 after a long illness, we were so sad that we didn't really think about getting another cat.  Then in July, we learned of someone who had rescued a litter of feral kittens and their mother. We visited, and saw five beautiful kittens. Finally we chose two of them, a black male with a tiny white patch exactly where a bowtie would go, and a three-colour female. We brought them home - they were so tiny that both fitted comfortably in one cat bag. Once home, they cowered in a corner of a bookshelf in the room we'd set aside for them.

It took us a long time to find names for them. We wanted something that was he-and-she pair, but nothing we came up with really suited them. It was weeks before we thought of Hercule Poirot and Miss Marple, always abbreviated to Missy, names which seemed to suit them very well.

Hercule was always the bold one. Missy spent her first days with us cowering on the bookshelf, or hiding behind the books - she developed an amazing talent for hiding herself which she retains even now, despite being several times bigger.

But Hercule was soon exploring everywhere in the house. He grew fast - after our experience with Lewis I weighed them regularly and kept a chart, so I could see how quickly he was gaining weight.

It took only the slightest thing to make him purr. Just looking at him was enough. We called him "Hercule Purr-o-matic Pussycat". 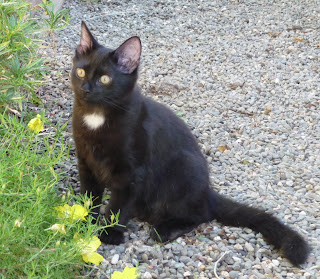 As he grew up, he became more and more like Lewis. It was as though, from somewhere in pussycat paradise, Lewis was advising him. We fed them both slices of beef, calling it rat in the hope they'd get a taste for it. But soon Hercule would eat nothing but prawns, Lewis's favourite treat - well, and his usual dried catfood of course. In so many ways he seemed to be copying Lewis.

He was a hunter - his sister too, and we mostly didn't know who had done the hunting. They often showed signs of their feral background - Hercule with his hunting, Missy with her ability to hide.

At the back of our house is a stream, usually dry. It's possible, though tricky, for humans to cross it, but nothing for a cat. Just the other side is the garage of a neighbor's house, and under the floor there is a space easily big enough for cats to hide in. It became their second home. Usually when we came home in the evenings we'd call and they come running across our back fence.

Sometimes, especially lately, they waited for us to come to them. My fondest memory of Hercule is him sitting on the opposite bank, looking at me curiously, his eyes bright, his pretty white bowtie shining through the leaves. I never did manage to take a picture of him there, he'd run off before I could reach for my camera.

He ran everywhere, all the time. He never walked. Even going through his catflap he ran - we worried if that ever it was locked, he'd hurt himself. While we were eating breakfast, he'd run to the little dish of cream, sniff it, run somewhere else, run back, lap up a little, run off, run back... we joked that he wasn't really black, it's just he ran so fast that the photons couldn't keep up.

Just two weeks ago, Missy came home one evening with what turned out to a broken femur. She had surgery and as I write this she's still limping with a huge shaved patch on her left flank. 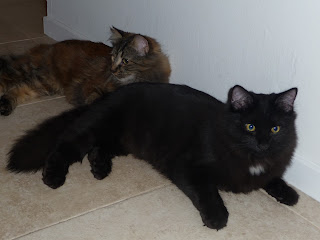 He was always too busy to be really affectionate - sometimes he'd accept a cuddle for a few seconds but then he'd be off somewhere on an urgent mission. But when he was snoozing during the day he was always very happy to have his tummy tickled. He'd roll over and stretch out, purring noisily as I ran my hand up and down his belly. He'd even make a Moebius, his tail pointing the opposite way to his ears - another sign of Lewis's influence. That's my last memory of him, late yesterday afternoon. Then he remembered an important appointment and ran outside. The next time I saw him - broke my heart.

Last night I saw neither of them all night long - which is unusual. This morning Missy was around, but when I called "Hercule, cream" - which always brings him running - there was nobody else. I found his poor dead body in one of the streets the other side of the stream. It's not a busy street, but I suppose a black cat, at night - and of course he was certainly running.

We have no idea what this will mean for Missy, his inseparable sister, together since they were born and rarely far from each other. We hope she won't be too sad, but nobody understands the social life of cats.

So, adieu, Hercule, Purr-o-matic Pussycat. We hope at least that you've found Lewis up there in pussycat paradise.
Posted by n5296s at 11:56 2 comments: