The Garden Railway: the Galloping Goose gets DCC In 1890, the US Government passed the Sherman Silver Purchase Act. This extraordinarily misguided piece of economics required the government to purchase all available silver at a fixed price, convertible (indirectly) to gold. The immediate and predictable consequence was a boom in silver mining throughout the West, especially in Colorado. The next - equally predictable - consequence was massive over-production of silver and - thanks to the convertibility to gold - depletion of federal gold reserves. The act was repealed in 1893, instantly followed by the collapse of the price of silver and the abandonment of all those mines.

By then, though, construction of railroads to serve all these mines was well under way. In the far southwest corner of Colorado, the Rio Grande Southern connected Durango, via a great deal of beautiful but virtually uninhabited countryside, to Ridgeway. After its brief heyday the line never turned a profit, yet somehow it struggled on despite the total absence of the traffic it was built to serve. The distances were huge and roads non-existent, so the small amount of farming and what little mining was left just about paid for the few trains that ran.

By the 1920s, road competition was starting to hurt. The line superintendent had the brilliant idea of taking some second hand Buick and Pierce Arrow automobiles, and converting them to railcars. They were big enough to carry the tiny passenger load and, more important, handle the mail contract and the parcel traffic in a box-car tacked on to the back of the car chassis. Thus was born the Galloping Goose, and thereafter steam was used only for special occasions, when the traffic justified longer trains.

Seven Geese were built altogether, though only five carried passengers and normal freight. They rattled their noisy and smelly way through the deserted Colorado back country for two decades, saving the line from oblivion in the Great Depression of the 1930s. Finally in 1949 the railway lost the mail contract. In desperation, the freight car portion was opened up and converted to panoramic passenger accommodation. But it was no good, and the line finally closed completely in 1952. 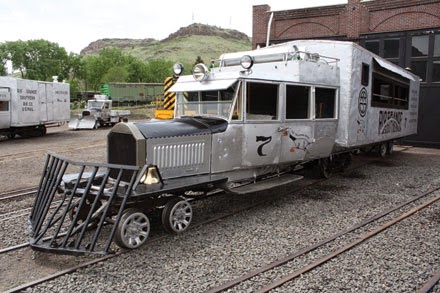 By then, though, the Rio Grande Southern and its big brother, the Denver and Rio Grande Western were known to every railroad enthusiast in the country. All of the Geese were saved, spending decades as static ornaments in the little towns they served until, in the last ten years or so, they have been restored to running order. So now you can travel on each and every one of these unique (and smelly and noisy) vehicles, surely the only class of locomotive for which this is true.

When I built my garden railway, I always wanted to have one of these. Accucraft, a boutique builder of large-scale rolling stock, made several different Geese for a while about ten years ago. They are unobtainable now, but I kept an eye on eBay and after a few weeks a model of No 7, the final Goose, showed up at home. She's in beautiful condition, hardly ever operated I'd say, and as a bonus, had been expertly fitted with a Soundtraxx sound card, compete with authentic Goose sound effects. She still had all the documentation and instructions from the conversion. I tried her out with simple DC input, and she ran perfectly.

Unfortunately, though, I had to put a stop to that. My layout uses DCC, which is to say computer-based train control. Every locomotive requires a decoder, a tiny miracle of modern electronics that turns 18V AC on the track, with a superimposed control protocol, into DC to operate the motors and all the accessories. For modern locos, it's just a question of plugging in a decoder, and everything just works. Or so they say - I've never converted one of these, so I wouldn't know.

For older locos, it's somewhere between tricky and a nightmare. The biggest problem is that the rails are, obviously, connected directly to the motor. You have to figure out a way to break this connection - 100% reliably. Older LGB locos are particularly difficult, since the connection is direct between the pickup system and the motor. There is no wire that can conveniently be cut. The decoders I mostly use (NCE D408SR) are fairly robust - except that even a fleeting contact between any of the motor or accessory outputs, and the track voltage, will toast them in a heartbeat. My worst experience was with my LGB track cleaner, where a failed piece of insulation toasted the decoder, all the other electronics in the loco, and in the ensuing meltdown took out some of the control circuits for the layout.

In this case, though, the motor and pickup wiring was easy to separate. Then there is the big decision: to do a "full" DCC installation, with everything like lights and sound running of separate decoder accessory outputs; or a "lightweight" installation, just connecting everything to the motor output. The latter is easier but means that lights and the rest can only work when the loco is moving, which I find a lot less satisfactory. In this case it was fairly easy to rewire it for a full installation.

A sound card makes it much harder. The Phoenix uses the track supply both for its own power, and as a control signal to tell it what noise to make - not only the speed of the train, but other Goose sounds like changing gear. It has a rechargeable battery, to supply power when it isn't moving, but lead-acid batteries don't like being left uncharged and I think mine has long since gone to the great battery charger in the sky. There is a separate charger circuit, though, and the obvious thing to do is connect this to the track pickup, using the motor output only for control. So that is what I did.

Big mistake. When I connected everything up, the sound card operated even when it shouldn't. By the time I finally realised that I'd just arranged a sneak feed between the track and the motor output, it was too late. Toasted decoder. Removing the connections to the sound card and installing a brand new decoder confirmed this. Thank goodness for NCE's "no questions asked" $25 replacement warranty.

A sound card has inputs that make it whistle, toot, clang bells and so on by command. As delivered, my Goose had reed switches underneath that could be operated by fixed magnets in the track. This isn't very practical but with DCC it's obvious to run these from the decoder. Obvious, but not easy. There is no common neutral between the sound card and the decoder, so the operation has to be electrically isolated. This means using either opto-couplers or relays. As long as space is available, I prefer relays - they're not polarity sensitive, and generally more robust.

I ended up building an auxiliary card on a small piece of stripboard with three relays: one each for the horn and bell, and a two-pole relay to isolate the sound card completely. Sound can be very atmospheric, but there are times when you'd just like the trains to look good, chugging along in silence. It also has the 6 volt regulators that run the lights - the decoder produces 18V, which is way too much.

There remained the problem of providing independent power to the sound card. $10 on eBay or so will buy an isolated DC-DC converter, taking the decoder voltage as input and generating 12 totally isolated volts as output. End of sneak path.

Finally, after several weeks of sitting on my bench, Goose #7 is ready for service, with controllable lights and thoroughly Goose-like sound effects. The picture below shows everything that hides inside the freight car. Its a good job there's plenty of room!