Railroads to the Gold

For someone raised in Europe, the sheer scale of the American West is hard to grasp. It takes a long day of driving to get from San Francisco to Las Vegas. But when you finally arrive, after 10 hours or more on the road, you are still only about a third of the way to the Rockies. To cross Nevada on US Route 50 will take all day, if you stop from time to time, and you will pass through almost nowhere, just endless desert and mountain ranges. Not for nothing is it called "the loneliest highway".

But it was the railroads that made the West, not roads. The first transcontinental railroad connected California to the then edge of civilisation at the Mississippi, nearly 2000 miles away. It was built in the astonishingly short time of 6 years, crossing the vast deserts of Utah and Nevada, the Rocky Mountains and even more challenging Sierra Nevada. Apart from the vast hostile terrain, its builders also had to deal with the understandably hostile natives, who would see their homelands torn away from them as a consequence.

The first main lines in Britain were the London and Birmingham and the Great Western, from London to Bristol. These were both a bit less than 100 miles long, nothing at all compared to what was needed in the US. Once the trunk lines were built, in both countries, there was the opportunity to build branches to serve other towns. A typical British branch line was 10 or 20 miles long. It would carry a daily goods train, stopping at every station to set down and pick up wagons, and a handful of daily passenger trains, also stopping at every station.

There were branch lines in the West too, but they ran to hundreds of miles. In 1905, gold was discovered in a truly middle of nowhere place, soon named as Bullfrog, about half way between Las Vegas (which itself barely existed at that time) and Reno. Very quickly the towns of Rhyolite and Beatty were established.

Immediately there was a need for railway connection to this new bonanza. And so not just one, but three separate lines set out across hundreds of miles of desert to reap these new-found riches. One, the Tonopah and Goldfield, came from the north. From the south two completely separate lines were started, built by rival organizations: the Tonopah and Tidewater, heading due south across arid desert for two hundred miles, and the Las Vegas and Tonopah, starting from a junction with the Union Pacific at Las Vegas. They were originally supposed to be a single line, but their founders had a serious disagreement and each decided to build their own line.

Building these lines across the desert was a massive undertaking. They ran on the eastern fringes of Death Valley, the hottest place in the world where summer temperatures routinely exceed 50°C. The men worked in gangs, one digging while all the others threw cold water - a precious and expensive resource itself - over him and each other. No reasonable person would try and work in the summer heat of the desert - but there was money to be made, every day the railway wasn't built was revenue lost. 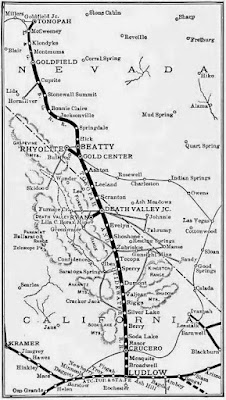 But gold mines are fickle things. The Bullfrog deposits gave generously but were quickly exhausted. By the time the railroads had been built across the desert, a total of 500 miles (25% further than from London to Edinburgh) the mines were played out. Already the population of Rhyolite had fallen drastically, from 5,000 to around 1,500. When people moved out they took their houses with them - they were simple wood structures, easily reduced to planks and nails, and wood was expensive.

The railway station, though was a much more permanent edifice. In fact even now, after a century of neglect and abandonment, it is still standing, the only intact building in the much-visited ghost town of Rhyolite.

On lines this long, train services were much less frequent than on Europe's shorter branches. There would be at most one daily passenger train, taking all day (or all night) to cover the 200 miles of track. As services ran down, reflecting the reality that there was really no traffic left, the services was reduced to every two or three days.

In summary, by the time the railway got to Rhyolite, there was nothing for them to do - "all steamed up and nowhere to go".

As you'd expect, the two southerly lines were quickly rationalised. The Las Vegas and Tonopah stopped running trains in 1919, after just 11 years. It had never made sense for there to be two lines, even if Rhyolite had prospered for much longer.

In Britain it wasn't unknown for railways to be duplicated for purely competitive reasons, just not on this scale. The tiny town of Ramsey, Cambridgeshire (population 5000) had two lines that met head on, one built to stop the other invading its territory. But each line was only about 10 miles long, not 200. 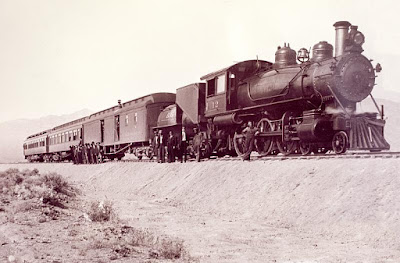 The Tonopah and Tidewater scraped a living shipping borax from the quarries around Death Valley. It also tried to become a tourist line, feeding the 1920s Furnace Creek Inn in the valle via the narrow-gauge Death Valley Railroad. It never fulfilled the promise of its name - Tonopah was 100 miles north of the Rhyolite terminus, while the closest it got to tidewater was at Ludlow, in the middle of the Mojave desert 200 miles from the sea. Somehow the line struggled on through the 1930s, despite major flood damage in 1933 and 1938. It finally closed in 1942, and now it's very hard to find any trace of it.

The Tonopah and Goldfield hung on for a bit longer, not closing until 1947. It scraped a living serving the ranchers and the small remaining mining activity in the desolate area between Beatty and Tonopah. Many of the ties (sleepers) were sold to Scotty's Castle for use as firewood, where they remain in a huge pile.

Today it's the first line to close, the Las Vegas & Tonopah, that is the easiest to find, since most of highway 395 from Las Vegas to Beatty follows its path.

It seems incredible that 500 miles of railway would be built, in the amazingly short time of just three years across uninhabited, desolate country, to serve a single collection of mines. And sad that despite that, the mines were already running down by the time they got there, leaving them to eke out an existence serving a population that barely existed.
Posted by n5296s at 10:46 No comments: