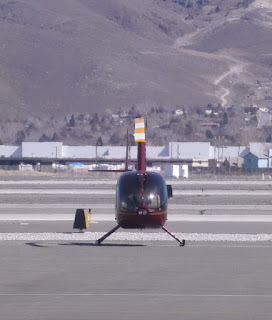 Well, the day has come when I have to face up to not flying the helicopter any more. It's been obvious for a while, really, or at least it should have been. I've been trying to fly at least once a month, but not always succeeding. And slowly, my skill level and comfort level have been dropping off.

Flying a helicopter is not like riding a bicycle (in a number of respects, actually). It's a very, very delicate thing, and it takes constant practice to be comfortable with it. Take off and landing are much more delicate than in a plane, you have to touch down with absolutely no lateral motion or rotation, and if there's the slightest wind this is a lot harder than it looks.

The odd thing about flying helicopters is that it can only be done if you are completely relaxed. And it just happens to be about the most unrelaxing activity you can ever undertake. The slightest false move will, at best, wreck half-a-million or so dollars' worth of machinery, and at worst kill you or somebody else. So if you're not completely on top of things, you tense up and then it's just about impossible to do anything smoothly or properly.

The very worst example of all this is slope landings. Imagine you have to land to pick up an injured person, but there is nowhere absolutely level. You line up parallel to the slope, and very gently touch the uphill skid on the ground. There must be absolutely no motion of any kind relative to the ground, even if you're doing this in a gusty wind. Now you slooowly lower the other skid to the ground, by lowering the collective, meanwhile moving the cyclic to the uphill side so the rotor shaft remains vertical relative to gravity, not the ground. Takeoff is the opposite. The slightest horizontal motion can tip the heli onto its side, with expensive and possibly fatal results. If this sounds hard - well, you have no idea until you've tried it. And you have to be able to do this with absolute confidence and smoothness to claim to be a helicopter pilot.

Flying the helicopter is one of the most enjoyable things I've ever done - especially when I was really on top of it. You have a sense of controllability that absolutely nothing else gives you. You can hover at any altitude, go backwards and sideways, do pedal turns, with absolute precision. It's really an amazing feeling. But for actual practical use... there's really not that much you can do with a helicopter, that you can't do with an airplane. Of course that's not true if your business is long-line work (using the aircraft as a flying crane), or rescuing injured people from road accidents, or a bunch of other extremely useful things. But those are professions, not hobbies.

In theory a helicopter can land on any more-or-less flat and level piece of land with room for the rotor blades, like your backyard, or a restaurant parking lot. You can land anywhere, go anywhere. Well... except you need permission from the landowner, which is unlikely to be forthcoming because of liability issues. In California you can't land on a public road. If you go out into the wilderness somewhere, nobody is likely to see you - but you could be in big trouble if they do. And speaking of wilderness, landing in a Designated Wilderness - which means most land in National Parks and a lot else too - is flat-out illegal and will get your helicopter confiscated. I called the Bureau of Land Management (BLM) once to ask about landing on BLM land - which covers an awful lot of middle-of-nowhere, desert and so on. Several people were very helpful but in the end nobody knew the answer. And forget keeping your heli in the backyard, regular use of an off-airport location requires all kinds of permission which you'll almost certainly never get.

And that's if you have your very own helicopter. If you're renting - and there are very few places that will let you fly without an instructor, other than for specific training purposes - then you're subject to the owner's limitations. They have to worry about liability too, plus they don't want you wrecking their aircraft. Most likely, this means no off-airport landings, and no overnight stays.

Owning a heli makes a wonderful dream, but unless you were an angel investor in Google then you almost certainly can't afford it. It's not just the capital cost, which is comparable to an airplane, but also the running cost. Just insurance is well over $10,000 per year, and maintenance is much more than for fixed-wing - which given the number of flight-critical rapidly-moving parts is not a surprise.

And there is one really bad thing about helicopter flying - airports. Given you can't really land anywhere else, this is kind of important. The problem is, airports are designed for and mostly used by airplanes. And airplanes fly very differently from helis. For one thing, even the humblest trainer is a lot faster, especially on final approach. So flying anywhere near an airport is little short of terrifying, as you feverishly scan the skies for other aircraft, whilst trying to work out where you are going to land and how to get there while keeping well out of everyone's way.

In an airplane, there's only one thing to do. There's one runway in use (except at the largest airports), and that's where you're going to land. You fly a conventional and well-defined traffic pattern, as does everyone else. You need to keep your eyes wide open but you won't find anyone suddenly flying at right angles to you - except those pesky helicopters of course. But the helicopter can land anywhere, and certainly doesn't need a runway. A few airports have designated helipads, and even well-defined routes to get to and from them - but most don't. So you study the airport diagram in the A/FD and try to figure out where you can stay away from the traffic pattern, but it's often not obvious.

Towered airports are mostly simpler, since the tower will generally take care of separation. But not always - Concord tower once very nearly killed me, giving me an unconventional departure that took me straight through the path of an airplane that was also talking to them. We missed by about 100 feet. Another problem is that you need to be very clear with tower what you're planning. A busy airline airport once gave me a takeoff clearance without being precise about the route. The controller was pretty grumpy anyway, and I didn't go through exactly what I was planning with him - which was a big mistake. After departure I got the dreaded "please write a number down to call on landing". Nothing came of it, in fact they were quite nice about it, but they made it very clear that my departure route had been a surprise to them. 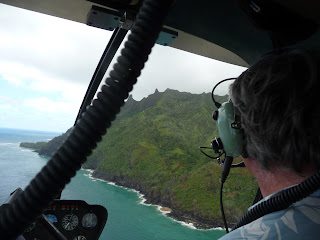 It has given me some unforgettable flying moments, like my very own self-fly helicopter tour of Kauai. And flying (perfectly legally) under the Golden Gate bridge. I don't for a moment regret the time and money that I spent learning to fly the heli. But staying current enough to fly safely and with confidence, for no obvious practical reason, is another question.

All this came to a head when my instructor bluntly told me that I was no longer proficient enough to solo in his helicopter. It didn't come as a big surprise, I'd been feeling less confident myself too. But it did mean I had to make a big decision. Do I fly more often, at least a couple of times a month, and more for a while, to bring my skills back to the right level and keep them there? But that would take a lot of time, which I really don't have, and even more money - renting a Robinson 44 is $500-600 per hour. It's just not realistic, for me anyway.

So that's it, bye bye helicopter. Maybe I'll fly an occasional hour of dual, just so I don't forget completely. I fear that I'll find it more frustrating than anything else, feeling my own lack of skill and confidence and knowing that I can't go for an occasional solo flight. On the bright side, my bank account has been rejoicing ever since that depressing meeting with my instructor. 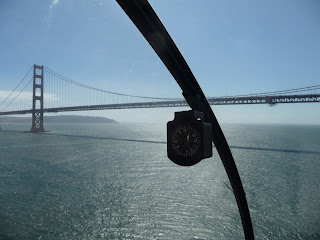