Offroad in Anza Borrego: Getting There

We've been to the Anza Borrego park a couple of times before, but we never had a proper 4x4 so there was a lot we couldn't explore. This time we drove there in our Toyota FJ, giving us the ability to go absolutely anywhere legal.

To make the journey there more interesting, we decided to repeat our journey of a few years back along the San Andreas fault. You can stay within a few miles of the fault all the way to New Cuyama on route 166.  The route is 200 miles long from Hollister to New Cuyama, and there is no gas anywhere along it. I was glad to have an extra 5 gallons of the stuff in the can on FJ's roof. 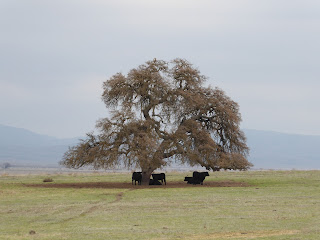 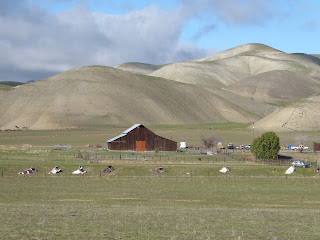 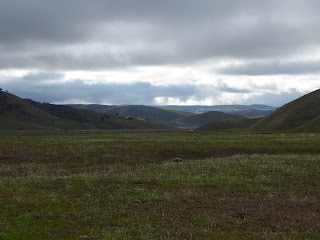 The first part of the route passes along the eastern edge of the Pinnacles, on route 25, a beautiful road with almost no traffic. One oddity: towards the southern end it crosses a river, and along the river bank there are a dozen or so 1950s cars buried, nose first. Why? I couldn't find anything about this on the web, so short of going and knocking on the door of the farm house, there's no way to find out.

After that you have to deviate from the fault for a while - there used to be a road that ran along it, but no more. This takes you over the Parkfield Grade, a steep and twisty road whose last few miles are dirt. It's easy when it's dry, but it was muddy this time and I was very glad
we had FJ.

Parkfield is a very strange place. It's right on the fault, and there's an earthquake research center there. There's also a cafe, where we hoped to get a hot drink, but it was closed for renovations. There's a hotel, too, very rustic with a huge fireplace, everything made from great logs, and a collection of books to read to while away the evenings going back to the 1950s.

Since we couldn't get anything to drink in Parkfield, we stopped at the restaurant by the James Dean Memorial on route 46. This was the only open place of any kind along the entire route. They do a mean fruit pie! Where the employees live, I have no idea - the nearest town is Paso Robles, over 20 miles away. 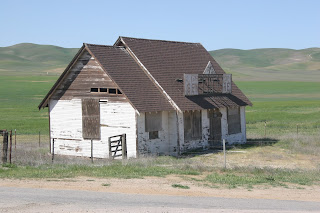 We last drove this route about ten years ago. There used to be a closed, boarded up general store in the middle of nowhere between route 46 and route 58, but this time there was nothing left of it except a patch of bare earth. How on earth did the store ever make a living from the occasional ranch in this desolate countryside? 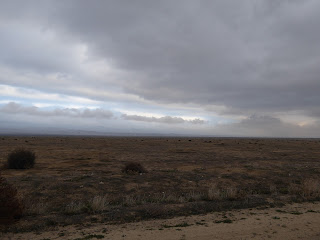 A few miles more brought us to the Carrizo Plain, with its giant 250 megawatt solar energy plant. Further on is dried-up lake bed. This is very visible from the air, even from an airliner at 30,000 feet. The day's weather was strange, with a dark overcast and occasional showers, and very cold too. It's an incredibly desolate place, made even more moonscape-like and spooky by the unusual late afternoon light.  In the middle of the most desolate stretch of all, we came upon two cars full of kids blocking the road. Just as I wondering how to deal with this, one of them backed up, leaving a gap. What they were up to, we had no idea - maybe a drug deal? But the nearest town of any size is over 50 miles away.

As we finally reached a proper road again, it started to snow. That was really a surprise. We were very glad to get to New Cuyama. It's not much of a place, but it's the only settlement of any kind for 30 miles one way and 50 the other. And it has a gas station! - although when we arrived, only one pump was working.

There's also a hotel and restaurant, the Buckhorn. There's even an airport, or at least a runway - it closed a few years ago, but the new owners, who also refurbished the hotel, reopened the runway. I guess it makes a good $100 hamburger destination for people in LA. We spent a pleasant evening there, with a giant burger for dinner accompanied by an excellent margarita, finished by watching some local guys play pool.